From the Archive: a Francois Lupot violin, Paris 1798 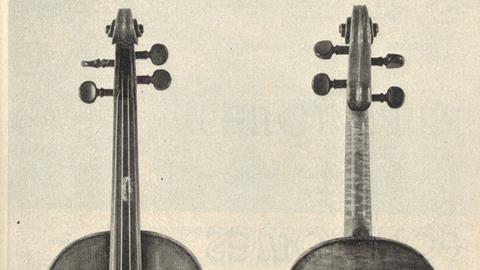 This illustration of a Francois Lupot violin was published in The Strad, November 1961. The following text is extracted from the article accompanying the photographs:

Francois Lupot was the father of Nicolas Lupot, the greatest of all French makers and by many regarded as the finest non-Italian luthier of all times.

The Lupots were an eighteenth and early nineteenth century family of makers, originating in Mirecourt. Francois worked first with his father in Luneville, but in 1758 migrated to Stuttgart, where he remained as violin and lute maker to the Duke of Wurtemberg until 1768. In 1770 he returned to Orleans, where he remained until 1794, in which year we went to Paris to join his son, Nicholas, with whom he worked until his death in 1804.

Today his fame is overshadowed by that of his famous son, and although his instruments do not approach his son’s in value, they have appreciated very considerably in recent years along with other fine examples of the early 19th century French school.

He selected his wood with great care and constructed a considerable number of instruments on a rather broad pattern. They were usually covered with a red-brown varnish. The archings are sometimes inclined to be full, with upright and narrow soundholes.

The violin here illustrated, which dates from Paris in 1798, is of particular interest as it contains an inscription inside the upper part of the back in Francios’ own hand that it was the tenth he had made since his arrival in Paris to collaborate with his son Nicholas. The violin clearly shows the influence that Pique exerted on the works of the Lupots, father and son, as the model is a sharp departure from that employed while the Lupot family resided and worked in Orleans. Even the character and colour of the varnish, which is dark red-brown over a golden undercoat, is reminiscent of Pique.

The one-piece back is of maple and a small horizontal wave. Similar wood has been used for the sides and head. The table, which is in one piece, is pf somewhat irregular grained pine, open on the bass side and fine on the treble. The principal measurements are as follows: Length of body, 14 inches (full); Upper Bouts, 6 7/8 inches; Lower Bouts, 8 3/8 inches; Middle Bouts, 4 ¾ inches; Ribs, 1 1/8 to 1 3/16 inches; String Length, 12 13/16 inches.