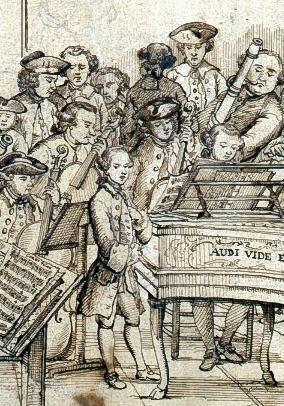 An anonymous picture of a 24-piece Baroque chamber orchestra has been sold at auction in Brussels. Dating from around 1770, the large-scale pen-and-ink drawing is said to include an early depiction of Wolfgang Amadeus Mozart.

Measuring 46 x 59cm, the drawing is notable for reproducing the sheet music so precisely that the key and time signatures can be identified. It also gives an idea of the number of musicians each sharing a music stand, the double bassist’s performing style, and how the groups of instruments were arranged. The figure assumed to be Mozart is standing to the left of the harpsichord, on which is inscribed the Latin motto Audi vide et tace si vis vivere in pace (‘Listen, see, and be silent if you wish to live in peace’).

Formerly part of a private collection, the work was bought by the Salzburg Mozarteum Foundation. It can be seen until the end of October at part of an exhibition of pictures of the composer at the Mozart-Wohnhaus in Salzburg.

The full picture, along with further details, can be found here.