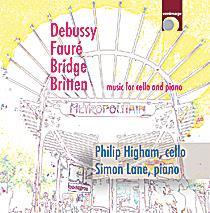 Philip Higham plays with the conviction of a far more mature soloist in this debut disc with pianist Simon Lane. Higham, who in 2010 celebrated a hat-trick of top international prizes, looks set to capitalise on his success with this disc and another, of Britten’s Suites, that has already been recorded but is not yet released.

From Lane’s arresting opening in Debussy’s Sonata, the young duo really carries the listener with it, and there’s a sense of satisfying rightness to the placing of every note. Debussy’s mercurial mood changes are well characterised and the Final is marred only by excessive breathing sounds in the last unaccompanied statement.
Higham shows an affinity for Britten’s Sonata with an innate sense of overarching phrasing to the Dialogo’s fragmented statements and some stunningly virtuosic pizzicato in the scherzo, every rapid note audible in the clear, open sound of this recording. His broad, sustained bowing comes into its own in the Elegia, his c.1730 Tecchler cello at full volume.

Higham chooses miniatures by Bridge and Fauré to complete the disc. His powerful sound is excellent for Fauré’s Élégie, but his Papillon consequently feels more like a moth. Bridge’s Mélodie pours out ecstatically, and Spring Song bids the listener farewell with exquisite simplicity.