Choosing the right rosin for your instrument

It's that yellow - or brown - stuff you put on your bow before you play and the white dust you clean off afterwards. But what is it and how do you choose it, asks Sonia Joseph 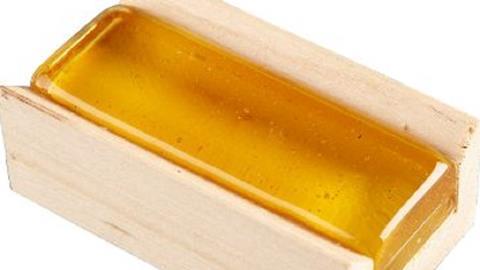 String players can take years finding the right instrument. Equally tracking down the bow which is perfect can be a life's work. Weighing up the merits of a plywood case as opposed to a plastic moulded model will not be the work of a moment. But how much thought is given to that little-valued piece of equipment, the rosin?

According to the bow maker Matthew Coltman, players generally fall into two groups. 'Some are rosin devotees: people for whom no price is too high and no effort too great, in the acquisition of good rosin,'he explains. 'Others make as much effort in purchasing rosin as they would employ in buying a paper clip.'

Rosin is critical for good tone. It helps the bow to displace the string from its resting position, which in turn oscillates to set up a vibration in the body of the instrument. This then radiates through the air as sound.

The purpose of rosin is to increase the friction between bow and string. If there were no friction at all, the bow would, like a skater on ice, slide over the string, which would not move. While even unrosined hair creates some friction, in practice it is not enough to produce a reasonable sound.

Rosin coats the hair causing the bow to 'stick'. The bow drags the string, displacing it from its position of rest and increasing the tension. Eventually the tension overcomes the friction and the string slips back into equilibrium. This 'slip-stick' cycle is repeated continually.

It is more than likely that in the early days of bow use the precise physics of sound production was lost on the players. The earliest accounts of bows being used on musical instruments date from lslamic and Byzantine paintings and literature of the tenth and eleventh centuries. It was during the eleventh century that their use spread from Spain into the rest of Europe.

Bruce Perrin of the rosin manufacturer; Hidersine Company, conjectures that 'as instruments were made out of wood, musicians turned to the same source in order to help their bows to work.' Certainly for centuries, humans had made use of various pine species by piercing the bark of the tree and collecting the sap. Records show that it was used for sealing the seams of wooden ships at least as far back as the fourth century.

It seems likely that among the earliest producers of rosin was the ancient city in Asia Minor; Colophon. Certainly it is assumed that it was from here that the other name for rosin, colophony, derived.

By the Middle Ages there is clear evidence that rosin, or 'Fidelharz', was rubbed into the hair in order to increase the effectiveness of the bow. A 14th-century German text suggests that the substance applied to the bow at that time was resin from the spruce tree. Another contemporary account of Arabian instruments also mentions the use of cobbler's wax and mastic on bows.

Writing in the early 19th century, Jacob Augustus Otto, violin maker to the Grand Duke of Weimar, commented on the attributes of good rosin. He said that it 'took hold [of the strings] very well, without scratching' and 'did not lie thick upon the strings, but dispersed in dust'. Times have not changed so much.

People writing about stringed instruments during this period seem to have enjoyed including their favourite rosin recipe. According to Otto, turpentine needed to be boiled in a 'new earthen pot' with water for several hours. After this it required to be kneaded manually until the water had gone. Ideally, it was then left in the sun until the last moisture had been extracted.

Modern manufacturing techniques for rosin are less whimsical, but the essential process has not changed. Turpentine resin is isolated from pine or spruce trees. Collection generally takes place in the spring when the sap is rising.

The resin is distilled to remove turpentine and other elements that could be harmful to the instrument and varnish. Pure colophony would be too brittle to use and would result in a scratchy sound, so the solid residue is further refined and heated before being mixed with plasticisers to modify its consistency including, usually, a small amount of oil to soften it. Alkaline solutions are normally added to neutralise the acid. The precise blends are a closely guarded secret.

The rosin is then put into moulds and allowed to cool. Generally, metal moulds are used to ensure that this process occurs as slowly and uniformly as possible. This avoids cracking and separation by the additives.

Choosing satisfactory rosin can be a daunting task. Account needs to be taken of all the variables: the instrument, the strings, the bow and the style of the individual player. Equally relevant can be where the instrument is to be played. Rosin comes in dark and light varieties, soft and hard and just about everything in between. For those with respiratory problems there are low dust formulas. There is even rosin flecked with gold, on the basis that the small pieces of metal it contains give extra grip and bite.

The violin teacher Sheila Nelson points out that it is worth paying more for good rosin. Expensive rosins are generally more refined and the purer the rosin, the better it is able to coat the hair.

Sound combined with practicality is the key to choice. The violinist Emanuel Hurwitz comments that, for him, dark sticky rosin can produce an overly gritty sound, as it provides too much grip and prevents the bow from moving smoothly. Very powdery rosin can be useful for new bow hair, while on hair which has been played in, it might well provide insufficient cohesion. Hurwitz adds that it can also leave the player surrounded by 'clouds of rosin'. To sum up, rosin must be sticky enough to provide sufficient contact without clogging the bow. Clearly there is no substitute for trial and error.

Some players advocate varying the rosin according to the conditions. Thus a violinist playing in front of a microphone might opt for soft rosin, while, in a large concert hall in front of a full orchestra, the same player might choose coarser rosin with more bite. Touring musicians such as Stephen Williams, principal double bass of the English Chamber Orchestra, use a relatively dry rosin in hot countries and a stickier colophony in a colder climate,

Barrie Kolstein of Kolstein Music in New York acknowledges that it can be particularly difficult for double bass players to find the right rosin. Because the mass of bass strings is particularly great, many use very sticky rosin, which provides sufficient friction to compensate for the inertia of the strings. Sticky rosin, however, tends to increase the sliding friction, so the string does not move freely in the sliding phase. The ear can then pick out the sticking and slipping of the hair against the string. In consequence, Chris West, of Guildhall Strings, advocates using a minimum of rosin. Kolstein says that it can also be helpful for players to 'custom blend' rosin and to this end offers two cakes of bass rosin, soft and hard, in one package. Alternatively a mix of bass and violin rosin can be effective. The tacky soft rosin supplies the 'stick', while the harder rosin provides the slip. Thus a smooth sound is produced. Another suggestion for bassists comes from James Beament, author of 'The Violin Explained' and a double bass player, who recommends that bass players apply rosin to fingers to provide extra grip in long pizzicato passages. And bass rosin has proved a solution for some higher string players with rosin allergies.

Rosin is best applied to the flat of the hair, evenly along its length. Nelson advises players to avoid making the common mistake of overloading the heel. Equally, although it is always satisfying to put on too much and then whip the bow through the air to dislodge the excess, this can damage the bow by putting additional strain on the face at the tip of the bow and resulting in stress fractures to the head. Instead, rosin needs to be loosened by flicking the hair underneath with the thumb. This also takes out overloading. Finally those who find that they are using an ever-increasing quantity of rosin might find that the bow hair is old and not holding it properly.

There will always be a small resi