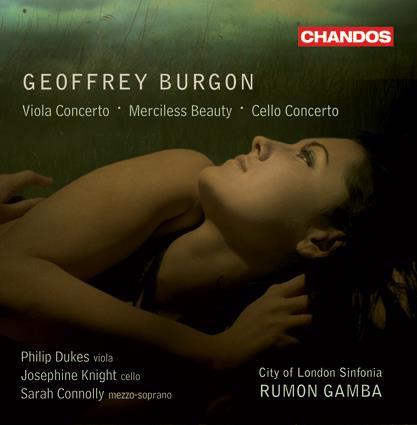 Thanks to Geoffrey Burgon’s highly successfully career in film and television soundtracks, his concert music sits comfortably among those composers working in a modern tonality. Both concertos are recent and given their world premiere recordings here. The Viola Concerto, written in 2008 for Philip Dukes, gets its subtitle from the American dance competitions held during the Depression era where the winners were the last couple standing. Burgon’s younger years as a jazz trumpeter colour the outer movements, where the viola becomes a lonely voice in a room filled with dance music. It is an ideal scenario for Dukes, who has the athletic left-hand agility to be able to compete with the substantial orchestral writing, while the imposing and fruity tone of his gorgeous instrument enables him to ride over climatic passages.

Only after completing the Cello Concerto (2007) did Burgon realise that its music reflects the dark film stories he had seen in his youth, with the hunted person being represented by the cello. He worked with Josephine Knight on the score’s technical aspects, and between them they have spared the solo role little in outgoing virtuosity, yet at the same time her dramatic, dark tones move effortlessly into passages of finely spun lyricism.