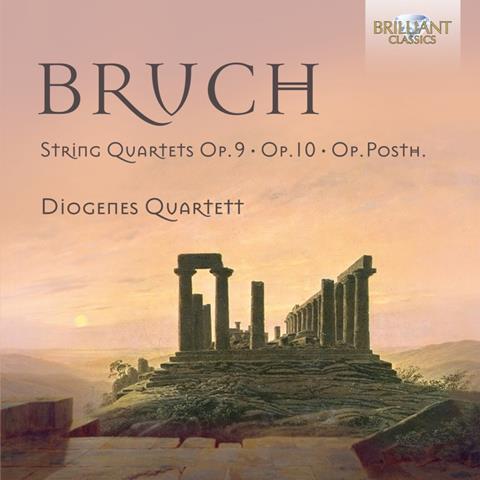 This disc presents not only the two published Bruch string quartets but also a recovered work from 1852, composed as an audition piece for entry to the Mozart-Stiftung in Frankfurt. It is a disc of great aplomb and energy from an ensemble – formed in Munich in 1998 – that, while not technically flawless, is nonetheless an exciting one.

The middle movements of the rediscovered quartet were in fact ‘recycled’ in his op.9, in the same key of C minor, but the fire and energy of the opening movement (after a languid introduction) and the effervescent finale show that the newly discovered material in this 2013 finding is a significant one. The quartets (enlivened with chromatic experimentalism and formal elan – as in the last two movements of op.10) might be seen as successors to Mendelssohn’s celebrated contributions to the genre.

In this beautifully recorded disc, the Diogenes Quartet plays with fire, clarity and flair, although there are a few places where more portamento would enrich the textures (as in the first movement of op.9) and the first violin’s penchant for linked portato bow strokes is a little irritating. These remain minor criticisms of a disc I would be happy to recommend.