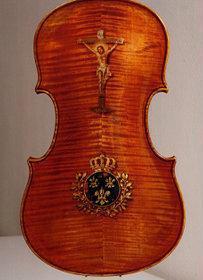 The Italian soloist and conductor Luigi Alberto Bianchi has been confirmed as the owner of a 1595 Brothers Amati viola following a lengthy legal dispute with an insurance company, reports L'Inviato.

The viola (pictured), which was commissioned for the Medici family, is known as the 'Viola Medicea' or the 'Viola del Crocifisso', after the crucifix decoration on its back. It was stolen from Bianchi's car in Milan in 1980, but was recovered in 2006. Bianchi's insurers, having already paid out to compensate the player for the theft, subsequently filed a lawsuit claiming ownership of the viola. This was contested by Bianchi.

The court of appeal in Milan consigned the instrument to the protection of the city authorities in Cremona until the legal dispute between Bianchi and the insurance company, Markel, could be settled. It was only last week that the case was finally resolved, with the instrument returning to Bianchi after he had reached a financial agreement with Markel.

During the time the 'Viola del Crocifisso' was missing, Bianchi suffered a further theft of a rare instrument. In 1998 his Stradivari violin, the 1716 'Colossus', was stolen from his mother's house in Rome along with two Peccatte bows. The violin has not yet been recovered.