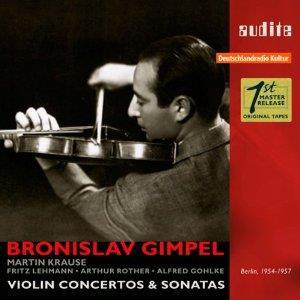 Bronislav Gimpel (1911–79) was a true force of nature. Emerging from a family of highly gifted artists and musicians (his pianist brother Jakob accompanied Morini, Milstein and Huberman, among others), he went on to achieve distinction as a celebrated child prodigy, orchestral player (Klemperer engaged him as concertmaster of the Los Angeles Philharmonic), chamber musician (he founded the New England Quartet and formed a piano trio with Leopold Mannes and Luigi Silva), teacher (at the University of Connecticut and Royal Northern College of Music) and international soloist. The recordings featured here usefully collect together everything he recorded for RIAS (Radio in the American Sector) Berlin during the 1950s.

All three concertos were Gimpel specialities. The Sibelius, captured in astonishingly fine sound (vastly superior to many LP releases of the period), is closer to the plaintive intensity of Christian Ferras than the virtuoso boldness of, say, Stern or Heifetz. Szymanowski’s Second Concerto is no less distinguished, played with an effortless command and exultant lyrical fantasy to send the spirits soaring. Gimpel’s Wieniawski no.2 may not quite equal the all-engulfing virtuoso projection of Perlman and Rabin, but it is still a swashbuckling, fizzing performance of the kind one rarely encounters nowadays.

The sonatas, all with MartinuKrause (an extremely fine accompanist of the period, not be confused with the famous Liszt pupil and teacher of Claudio Arrau), demonstrate the exceptionally wide range of Gimpel’s interpretative sympathies. Listening to his fine-spun Schubert D574 and Tartini’s ‘Didone abbandonata’ sonatas one might think him an instinctive Classicist, yet turn to Mendelssohn’s F minor and Schumann’s A minor sonatas and one enters a captivating world of fine-spun melodic enchantment. Arguably finest of all is the Janá?ek Sonata (again in fine sound), whose gestural changeability becomes deeply unsettling here, and Karol Rathaus’s rarely encountered Pastorale et Danse.