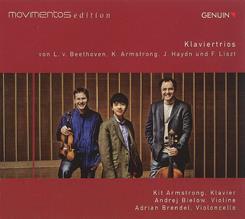 An unusual mix of works characterises this release from Ukrainian violinist Andrej Bielow, British cellist Adrian Brendel and the 20-year-old pianist Kit Armstrong (protégé of Brendel’s father, Alfred). A prolific composer as well as a pianist, Armstrong has contributed a work of his own – Stop laughing: we’re rehearsing! With a densely contrapuntal, keenly argued first movement echoing the mood of Viennese Expressionism, it’s a serious work (notwithstanding its title) and the players embrace its psychological core as much as the scherzo-like tint of its middle movement.

It’s in the two Classical-period pieces that this disc most impresses. Beethoven’s First Piano Trio is not only crisply turned out but unfailingly elegant and spirited, yet never forced. The trio section of the scherzo is gorgeously still and distant but lingeringly sustained. Haydn’s D major Trio is similarly successful, and its Andante acquires a hue of dark urgency, despite its lightness of touch and relaxed tempo.