Beethoven: Complete Sonatas and Variations for Cello and Piano 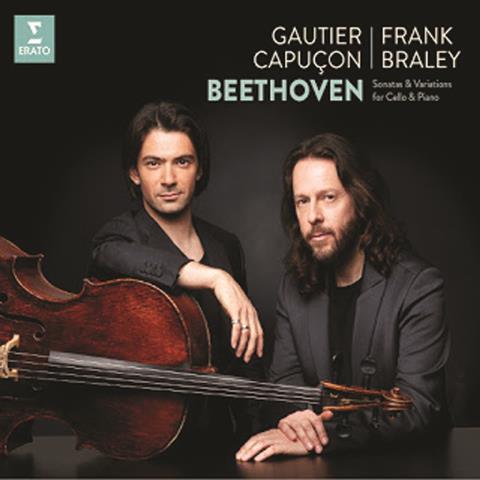 This significant release looks set to become a landmark in contemporary Beethoven recordings. Its textual accuracy, seemingly effortless technical facility, elegance of interpretation and high-quality sound make it one of the very best currently available.

Long-time friends and recital partners Capuçon and Braley appear to have gone through Beethoven’s scores with a fine-tooth comb, observing every crescendo, sforzando and subtlety of dynamic marking in a way that makes perfect musical and emotional sense. Piano–cello melodies, such as that in the G minor Sonata’s opening movement, are played at a true piano, with no danger of being swamped by the keyboard; and there is the proper element of shock in subito fortes like the sudden outbursts towards the end of the C major Sonata. Every sforzando is observed, and the intimate recording brings out both the timbres of Capuçon’s 1701 Gofriller cello and, occasionally, his expressive breathing.

The fast movements are taken at virtuosic tempos. Braley’s semiquavers flow with breathtaking ease and Capuçon’s demisemiquavers in the G minor’s Rondo are gossamer-light. High speed does not result in any loss of definition – the one exception being Capuçon’s cross-string semiquavers in the A major’s first-movement development, which scramble in an unwanted accelerando towards the passage’s end.

The whole world of Beethoven is here, from the elegant cello melody impossibly beautiful in its simplicity at the beginning of the F major, to the joyfully exuberant Allegro vivace finale of the A major, which bounces along. Add to this the three beautifully rendered sets of variations and you have a package to be cherished.