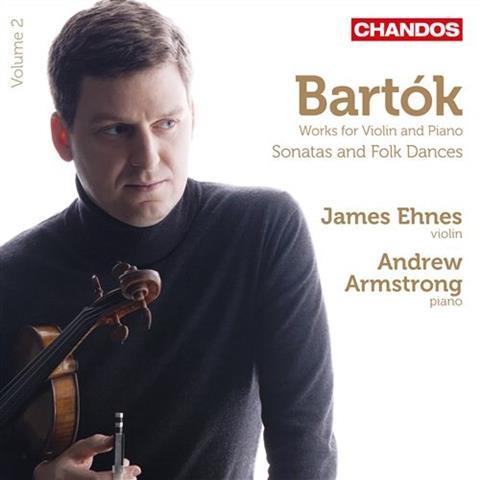 James Ehnes’s Bartók is full of emotional intensity and he meticulously follows the composer’s dynamics and fluctuations. The technical demands of the Solo Sonata (see Ehnes’s Masterclass on the work in the May 2012 issue) evaporate in a performance of stunning virtuosity and Ehnes reminds us how the chordal structure reveals the debt that Bartók owed to Bach. The opening ciaccona is played with unfailing accuracy of intonation. On reaching the third movement, Ehnes caresses the strings with more beauty than most, before moving into an electrifying account of the finale’s opening Presto.

More seldom played is the early unnumbered E minor Sonata, composed when Bartók was 22. Its roots are embedded in the music of Brahms, and the many changing moods of the opening movement give a powerful and often challenging role to the keyboard. The rest of the work shows Bartók’s growing interest in Hungarian folk music, and Ehnes brings a suitable degree of zest to the dances, though his intonation briefly slips in the finale.

The remainder of this well-filled disc is given to three suites of folk music, where Ehnes often takes riskily fast tempos, particularly in his mercurial view of the finale to the Romanian Folk Dances. Andrew Armstrong is an admirable partner throughout, and this is a strongly recommended release in excellent sound.