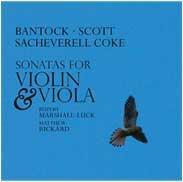 It’s always heartening to see efforts to revive the works of lesser-known, or even long-forgotten British composers, and to that end alone this release of mid-20th-century sonatas by Granville Bantock, Cyril Scott and Roger Sacheverell Coke is a welcome one. Three years in, and EM Records – run by Em Marshall-Luck, founder–director of the English Music Festival – has close to 20 issues focusing on the ‘golden renaissance of English music’. As Rupert Marshall-Luck observes in his detailed (sometimes too much so) booklet notes, there is ‘little superfluity’ in Bantock’s Violin Sonata no.3.

But where the construction may be deft, there’s little satisfying material, certainly in its first movement. The mysterious chromaticism of the second movement (‘The Dryad’), though, is well revealed by both players, even if the finale could take a touch more crispness and exuberance.