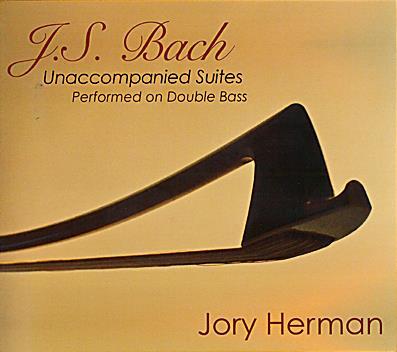 Whether as a result of the unassailable musical status of these suites, or because of an understandable desire to outsmart their cello-playing colleagues, it’s not surprising that double bassists have on occasion attempted to claim Bach’s solo Cello Suites for their own. Following the example of Edgar Meyer, who recorded nos.1, 2 and 5 over a decade ago, Texas-born Jory Herman, a member of the San Diego Symphony, has recorded nos.1, 2 and 3.

There’s no doubt that these are lucid and fluent performances, hardly ever prompting the thought that, by rights (or at least by design) the double bass has no business concerning itself with this repertoire. The instrument almost never seems mismatched to the material, though there may be the tiniest awkward shift, or the odd prolonged string-resonance. Because Herman’s readings are so involving, it’s only when you consciously think about it that the Courantes, say, seem remarkable for their nimble character and contain none of the stiffness, or indeed panic, you might reasonably expect to hear. The double-stopping in the beautifully phrased Sarabandes appears entirely natural as well. The recording quality is on the reverberant side, but it’s not long before you put that to one side to concentrate on the playing itself.