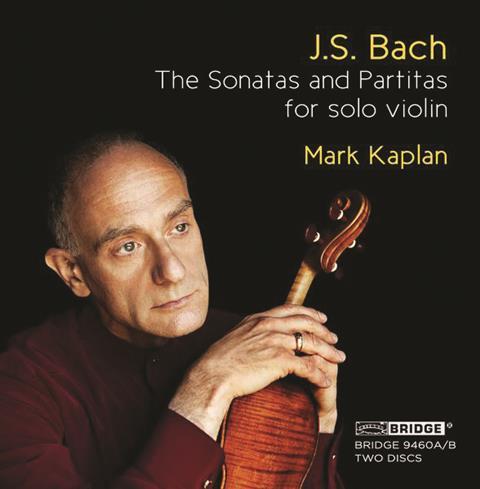 Mark Kaplan’s second recording of Bach’s solo works demonstrates not only how his interpretation has evolved over 20 years but also how elements of historical performance, particularly ornamentation and rhythmic flexibility, have infiltrated his thinking. This is most noticeable in the opening movements of the first two sonatas, whose florid writing is appropriately realised in quasi-improvisatory vein, and in repeated sections, most of which are embellished. His overall approach, though, is predominantly ‘Romantic’.

Kaplan defines the structures of all three fugues with skilful voicing and shaping of the line. He performs the aria-like Andante of Sonata no.2 with immaculate repose and characterises most of the partitas’ dances with buoyant rhythms and crisp articulations. He lingers at unexpected moments in the Adagio of Sonata no.3 and the deeply felt Sarabanda of Partita no.2 but, after crunching some of the Ciaccona’s initial four-part chords, keeps a firm grip on its linear and harmonic details, building a striking cumulative effect. Tempos are largely carefully determined but the final Presto of Sonata no.1 and the Double of Partita no.1’s Corrente seem excessively rapid. The close, resonant recording does full justice to Kaplan’s 1685 Stradivari (‘The Marquis’) but his fast, narrow vibrato often results in intonation erring on the sharp side.