Anker Buch, ‘the Victor Borge of the violin', has died aged 74

The Danish violinist became famous for mixing music and comedy 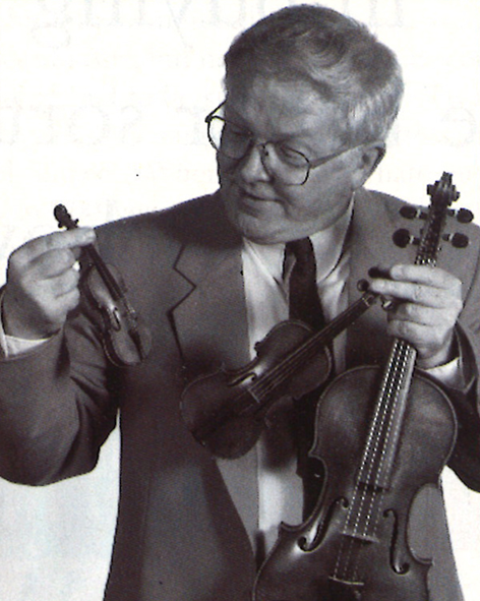 Danish violinist and teacher Anker Buch, who became famous in the US for mixing music and comedy, has died at the age of 74. Born in Aalborg in 1940, he began playing the violin aged eight. He first studied with Rolf Kjeldahl, concertmaster of the Aalborg City Orchestra, before taking his first professional job with the Iceland Symphony Orchestra. While there, he was encouraged to apply to the Juilliard School, where he studied for six years under Ivan Galamian. Among his contemporaries were Pinchas Zukerman, Itzhak Perlman and Paul Rosenthal.

During his time in New York, Buch supported himself by playing in clubs, where he was spotted by a TV talent scout. He performed on the Johnny Carson and Merv Griffin shows, the latter alongside his compatriot Victor Borge, whose style had a strong effect on him.

He gave his debut at the New York Town Hall in 1964, before touring Europe and the US with a team of Juilliard graduates, in a show called Around the World in 80 Minutes. He decided to focus his career in Denmark, but frequently returned to the US, where he remained popular. His act would often involve fooling the audience by playing the first eight bars of the Tchaikovsky Concerto before breaking off into an array of showpieces, or by using a trick violin that would break apart to reveal smaller violins inside (pictured): he would call this his ‘pregnant’ violin.

In an interview with The Strad in 1996, Buch says, ‘My formula is to make a serious start – say a Handel sonata, some Beethoven or Brahms. Then after the interval they get the entertainment, the acts I’ve perfected over the years with smiles and chatting and careful timing. The contrast works so well that I’m never out of work.’

In 1981 Buch bought a limestone mine, which he turned into a tourist attraction, organising tours and giving concerts underground, until he sold it to the state in 1997. He also founded a two-week summer school for violinists on the island of Mors in north-west Denmark, where tutors included Lars Bjørnkjaer, concertmaster of the Royal Danish Orchestra. Nikolaj Znaider was among the many young violinists to attend the school.

Buch played violins made by Giovanni Pressenda and F.W. Hansen. In 2000 he founded the Anker Buch Prize, awarded to people who demonstrated special talent or had done something special for the Danish music scene.

Among the violinists Buch admired was Mischa Elman, whom he heard several times performing at Carnegie Hall: ‘He was full of poetry as a player. I learnt so much from him – for example, “speeding down” when the fingers can’t move fast enough. No one knows how fast you want to play, so there’s always rubato to come to the rescue.’

Anker was a witty, funny and caring character. One thing I will remember him for is his totally unpretentious way of sharing music and the fun of music making with others. With his summer school and his many school concerts and solo concerts in the smallest village churches all over Denmark, he reached an audience that might not otherwise have had access to the experience of live classical music.

During his summer school I often sat in listening to his master classes when a young child or a mature conservatory student was guided through a violin concerto. Anker would amaze by carefully instructing…always with positive comments, never hacking or nagging at the student, but always bringing the student the best of advice. He would demonstrate every bowing in any violin concerto and he would often accompany with double stops the orchestra part of the concerto to support the student. It seems like he knew ALL the standard repertoire and all the orchestra parts by heart.