An innovative alternative designed to improve the ergonomics of playing

Like many musicians – not least her colleagues in the Munich Philharmonic Orchestra – violinist Katharina Reichstaller found that her playing had begun to cause her significant physical discomfort. ‘I realised the source of my problems was the position of the instrument against my body,’ she says. ‘When conventional shoulder rests became popular in the middle of the last century, they moved the violin higher up, making it harder for the neck to move freely and putting more pressure on the chin.’ Together with her business partner Martina Spaeth, Reichstaller began to experiment with prototypes that would offer support without forcing the player into a single position. ‘Of course,’ she continues, ‘some people do without a shoulder rest altogether, but for many of us that isn’t really an option.’

Their invention, the Poldauer rest, consists of a convex disc with a patented helical structure that rests just below the collarbone and attaches anywhere on the instrument’s back with a simple and easily removed suction cup. ‘We finish the plastic with a flocked texture to ensure it stays comfortably in place without slipping,’ says Spaeth, explaining that the ‘strength and flexibility’ of the design are only possible thanks to recently developed 3D-printing technology. Where worn varnish might disrupt the seal between the cup and the violin, a thin silicone disc is provided to ‘flatten’ the surface of the latter. This silicone layer is held in place by static, just like a smartphone screen protector, and along with the polyurethane suction cup avoids the need for glues or other adhesive agents.

‘Our rest brings the instrument back in line with the body and realigns the right arm with the shoulder,’ Spaeth says. ‘Some people try to achieve the same result with a simple sponge, but these lose their shape and the way they are fastened across the body of the instrument deadens its sound.’ The rest’s lower profile might also appeal to players of Baroque instruments, she suggests. It is available for violin in four sizes – including one suitable for fractional-sized instruments – and in one size for viola. 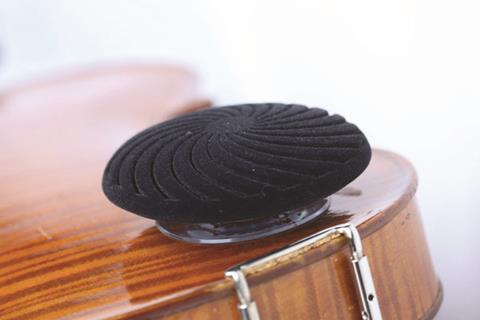