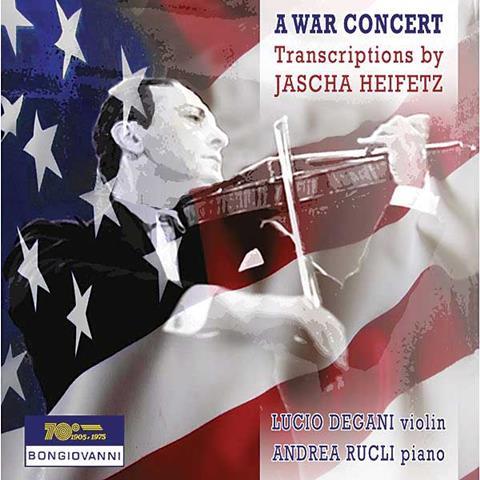 Entertaining troops at the various points of conflict during the Second World War was the contribution made by the 40-year-old Jascha Heifetz, and though details of the music he performed were never documented, it is reasonable to assume his programmes would have been of a lightweight nature to be enjoyed by everyone. Linking that with the transcriptions Heifetz was recording at much the same time, the Italian violinist Lucio Degani has created a supposed programme for one his war concerts.

A judicious and highly attractive mix, many of the tracks – including the traditional song ‘Deep River’, Manuel Ponce’s Estrellita and Stephen Foster’s ‘Old Folks at Home’ – are here played with warm tone and disarming charm. Degani revels in the technical fireworks Heifetz created in the adaptation of Gershwin’s Three Piano Preludes, and even more so in the five excerpts from Porgy and Bess, where he convincingly captures the operatic mood that seems to evade so many on disc.

Two of Kreisler’s original works – Syncopation and Farewell to Cucullain – are also included, with the pianist Andrea Rucli adding much to an atmospheric reading of Castelnuovo-Tedesco’s Sea Murmurs and a mischievous performance of Debussy’s Golliwogg’s Cake Walk. The recording has a short playing time (53 minutes) in monochromatic sound.