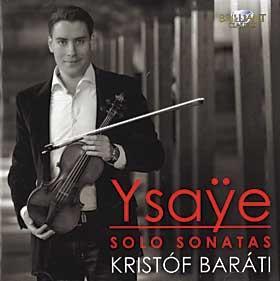 Kristóf Baráti is recorded with exemplary presence in a seductively enveloping acoustic – it feels as though the young Hungarian violinist is standing in the room with you, and the range of dynamics and articulation he encompasses is remarkable. Tapping into his instrument’s natural resonances, cleanly defined by exceptionally strong finger-falls (with occasional fingerboard resonance), the gives the effect of a pure, open sound being gently coaxed and cajoled rather than forced out of the instrument. Little wonder, then, that his mentor Eduard Wulfson is a former pupil of both Nathan Milstein and Henryk Szeryng.

Baráti’s dazzling range of bow strokes and ear-ringing intonation combine throughout to create the impression of technical challenges arising directly out of the music’s expressive core rather than mere hurdles to be overcome. In the opening ‘Obsession’ of the Second Sonata he employs an exciting slight kick to his staccatos and multiple-stopping reminiscent of the young Shlomo Mintz. But what makes this a truly exceptional disc is Baráti’s interpretative vision – movements that in even the most skilled of hands often sound expressively one-dimensional here emerge as deeply compelling emotional narratives. He even makes the moto perpetuo semiquavers that crown the ‘Fritz Kreisler’ Sonata no.4 dance free of musical gravity, with an enchanting sense of every note floating on air. A highly distinguished release.