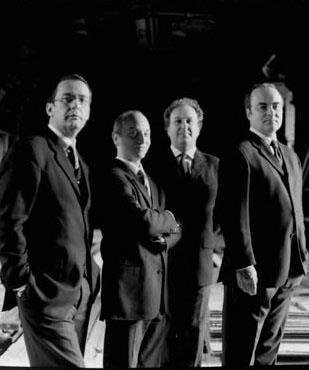 The Ysaÿe Quartet brings its 30-year career to a close this Friday night with a special concert in Paris. The performance, which is part of the Cité de la Musique's String Quartet Biennial, features a programme that reflects the ensemble's roots not just in French music but also in the music of the two Viennese schools. Quartets by Debussy and Beethoven – the F major op.135 – are followed by Mozart's String Quintet in C major K515 (with violist Isabel Charisius), Fauré's Piano Quintet no.1 (with Jean-Claude Pennetier) and Schoenberg's Verklärte Nacht (with cellist Valentin Erben).

In the 1990s it began recording for Decca, Aeon and Harmonia Mundi, and later released discs under its own label, Ysaÿe Records. Acclaimed for its interpretations of the Debussy and Ravel quartets, and the Fauré piano quartets and quintets with Pascal Rogé, the Ysaÿe Quartet also recorded quartets by Mozart, Beethoven, Schumann, Franck and Haydn – the latter complementing the group's five-year cycle of all 68 Haydn quartets at the Besançon Festival.

The ensemble has shown a strong engagement with contemporary music, premiering works by such composers as André Boucourechliev, Eric Tanguy, Pascal Dusapin, Frank Krawczyk, Thierry Escaich and Friedrich Cerha. A similar dedication to teaching is centred on the advance string quartet course that the group established in 1993 at the Paris Conservatoire, where students have included some of the leading young French ensembles, among them the Ebène, Voce, Modigliani and Hermès quartets.

Only violist Miguel da Silva remains today from the founding Ysaÿe foursome. The original second violinist, Romano Tommasini, was replaced in 1985 by Luc-Marie Aguera, and a year later Michel Poulet took over from Carlos Dourthe as cellist. In 1995 there were two changes, with Guillaume Sutre replacing the founding leader, Christophe Giovaninetti, and Marc Coppey joining as cellist. François Salque took over from Coppey in 2000, and since 2005 Yovan Markovitch has been in the cello chair.

In an interview in The Strad in 2003, da Silva explained the criteria that he saw as essential when dealing with personnel changes in the group. 'Choosing new members is a combination of the musical feeling, the sound and a very important concept of respecting the musical text,' he said. 'I have very passionate feelings about making the sound in the same way. It's difficult to explain, but it's very important to have the same ideas about the timing between the notes.'

He added: 'When we changed first violin or cello, there were many whom we asked to play, but not all of these had the same respect for, or conscience about, the musical text. This is a very important quality. When we started the Ysaÿe Quartet, we learned this from the Amadeus Quartet. Some quartets played Mozart from the Peters edition or the Breitkopf edition, but we had our own ideas about Mozart during that period.'