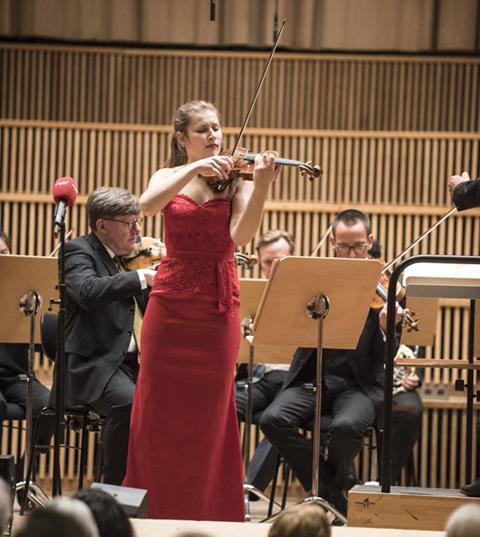 The German violinist Milena Wilke has won the €10,000 first prize at the ‘Ton und Erklärung’ music competition in Berlin. The second prize, worth €5,000, was won by Chinese violinist Fanglei Liu, a student of Kolja Blacher in Berlin. Musicians from 13 nations took part in the competition, held at Berlin’s . Jury chair Ulf Hoelscher said that Wilke had been the ‘most consistent’ performer throughout the competition and was the rightful winner.

Born in 1996, Wilke (pictured) is currently studying with Ingolf Turban in Munich, and her previous tutors have included Wolfgang Marschner, Latica Honda-Rosenberg and Rainer Kussmaul. Among her previous awards are a prize at the European Union’s ‘Pro Europa’ contest, and she has performed as a soloist with the Baden-Baden Philharmonic, the Freiburg Philharmonic Orchestra and the Belgrade Radio Orchestra.

Organised by the Cultural Committee of German Business, the annual ‘Ton und Erklärung’ competition is now in its third edition. Unlike in other competitions, competitors are required to discuss their interpretation of the repertoire in addition to their performance. The competition’s name, which translates as ‘sound and explanation’, is a homage to Strauss’s tone poem Tod und Verklärung. This year the commissioned work, for solo violin, was penned by the Turkish composer Zeynep GedizlioÄŸlu. In the final, players also performed one of Mozart’s violin concertos, accompanied by the Deutsches Symphonie-Orchester Berlin conducted by Manuel Nawri.