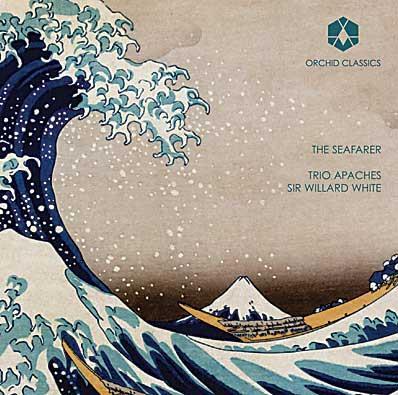 Sally Beamish’s piano trio arrangement of Debussy’s La mer came about as a result of the Apaches Trio’s search for a companion piece to its recording of her melodrama The Seafarer for speaker and piano trio. La mer would not on the face of it seem likely material for such treatment – the booklet self-deprecatingly quotes from Jaws: ‘We’re gonna need a bigger boat.’ But with the textural example of the Ravel Trio, in particular, to hand, Beamish has created a miracle of numerical shrinkage that does nothing to impede the musical and illustrative properties of the original. The performance is just as virtuosic, with Matthew Trusler and Thomas Carroll’s rich-toned and rhythmically taut string playing bobbing in and among the waves of Ashley Wass’s liquid pianism.

The two string players get more of an individual focus in Beamish’s own piece, where they and Wass are joined by Willard White, a sonorous speaker, in a recent translation of the Anglo-Saxon poem that sets a seafarer’s experiences on the ocean as a metaphor for his spiritual life ashore (the booklet is singularly silent on the poem and Beamish’s composition beyond reminiscences of its recording). Trusler and Carroll bring spaciousness to the keening melodies and character to the songs of the many birds that populate Beamish’s atmospheric but psychologically potent seascape, and the whole disc is warmly recorded.