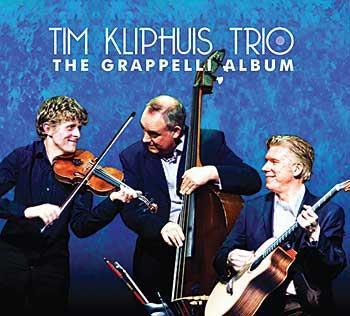 Dutch jazz violinist Tim Kliphuis is the foremost ambassador for the music of Stéphane Grappelli and for the enduringly distinctive gypsy swing style that Grappelli invented with his Hot Club de France partner Django Reinhardt. He has published a book on Grappelli (see Books, March 2014) and runs a gypsy jazz summer camp in the Netherlands each summer. This live album, recorded in a Glasgow club with his long-standing trio, demonstrates just how much Kliphuis, who also works with classical and folk musicians, is rooted in this music.

At times he seems to out-Grappelli the old master, with the same creamy tone, sliding rhythmic emphasis and use of tricks such as the breezy high harmonics figures. This is not simply pastiche however. The three players – as tight a unit as is possible, as demonstrated by the frequent unison licks – together have a slightly heavier, sharper sound than the original. The trio’s interpretations, from Hot Club classics (Honeysuckle Rose) to charming Grappelli compositions, such as Souvenir de Villingen, are thoroughly absorbing. Eighty years after the Quintette du Hot Club de France was formed, this album is a reminder of what a remarkable repertoire and legacy Grappelli left behind.