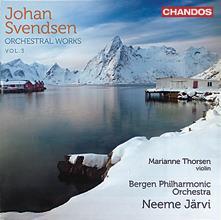 As one might expect from a composer who knew the violin ‘from the inside’, it is gratefully written, with lyrical passages subtly placed so as to hit the instrument’s natural sweet spots, and is cast in three (separate) movements, culminating in an enchanting, dance-like finale. Svendsen’s mastery of mid-Romantic textures and harmonies is a constant source of pleasure, even if, in the last resort, he fails to come up with a single truly memorable idea. That said, he could hardly wish for a more sympathetic and persuasive exponent than Thorsen, who receives first-rate backing from Neeme Järvi and his Bergen players in seductively realistic sound. The First Symphony is also well worth investigating.