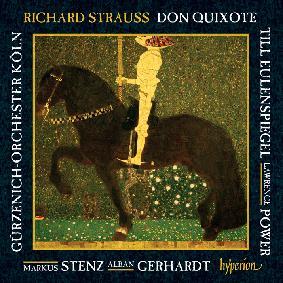 Strauss’s mastery of brilliant orchestral timbres allows him full scope to depict the two rogues in these tone poems in the most vivid of terms. Don Quixote’s imaginary adventures as depicted by the solo cello are immaculately characterised by Alban Gerhardt, who with Lawrence Power’s viola representing the faux knight’s servant Sancho Panza champions these hallucinatory escapades following the detailed instructions in the score with precision, colour and insight.

Nowhere is this more dramatically projected than in the second variation, where Gerhardt draws the schizophrenic hero in the boldest of colours with powerful articulation of the theme’s rhythmic contours. The contrast between the hero’s fancy and Panza’s pragmatism is portrayed with sensitivity by both soloists, especially in the sixth variation, where the musical narrative becomes more lyrical and tender, and where concertmaster Torsten Janicke’s solo violin enters to depict Dulcinea’s enchantment.

The Gürzenich Orchester, under Markus Stenz, brings outstanding virtuosity and lucid texturing both here and in a superbly transparent account of Till Eulenspiegel, while the clear recording showcases the plethora of detail in both works.