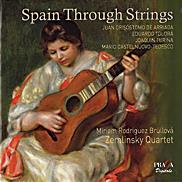 Although the Italian-born Castelnuovo-Tedesco is an interloper in a disc of otherwise Spanish composers, it is his Guitar Quintet that forms the highlight. Already 37, and knowing precious little about the guitar, he met Andrés Segovia, and the friendship that ensued inspired a score redolent of happiness. He uses the instrument in its classical form, without a hint of its Spanish associations. The young Slovak guitarist Miriam Rodriguez Brüllová gives a technically immaculate account that perfectly captures the work’s playfulness, and reveals an abundance of dexterity in the outer movements.

There is nothing anything inherently Spanish in Arriaga’s hugely attractive Third Quartet, a work fashioned from influences handed down from Mozart. Nor do we travel further south than French Impressionism for Turina’s evocative Toreador’s Prayer. But both are welcome, as is the colourful scene painting in Eduardo Toldrá’s triptych of sea pictures for string quartet, which, though stylistically predating its 1921 origin, is a gorgeous score.

The Zemlinsky Quartet achieves a perfect balance with Rodriguez Brüllová in Castelnuovo-Tedesco’s conversational passages, and its playing throughout the disc is beautifully refined. With a unified expressive intent, and revealing plenty of inner detail, these are technically impeccable performances, though a little more air around the sound would have been welcome.