Soundpost: Letters to the Strad

A selection of letters The Strad receives each month from its readers around the world: September 2019 issue 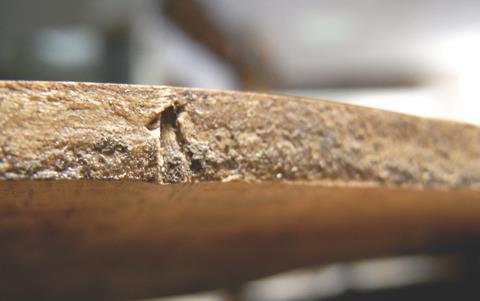 A ventral pin is clearly visible in the back of this c.1560 Andrea Amati violin. Photo courtesy Yann Poulain

As a ventral pin lover, I was delighted to read the great article on Jacob Stainer (‘Reviewing the Situation’, April 2019). Contrary to what can be seen in the Cremonese system, the violin featured contains a remarkable five pins. The same number can also be found in a 1679 violin by the German-born, Turin-based Enrico Catenar (see The Strad, May 1998). The work of Catenar, a contemporary of Amati and Stainer, shows strong evidence of their influence.

Another feature of Stainer is the presence of crunching marks on the outside of the belly that are barely recognisable as small dots under the varnish. This led me to extrapolate that he could have tuned his plates from the outside. Could it also mean that he was carving the inside before carving the outside, where five targeting marks would have been a necessity?

Although I don’t have an answer, I strongly recommend using the ventral pin system when carving the plates, without using a dial thicknessing calliper. It is a good way of getting closer to what these makers experienced at the time, and the only way of understanding that their system has less to do with engineering accuracy than sound quality and technological capability.

THE ELEPHANT IN THE ROOM

The article ‘An Elephantine Problem’ (Analysis, April 2019) raises some worrying issues. It points out that bows and instruments made before 1975 are exempt from the Ivory Act 2018, but then explains that owners will apparently be required to register their bows with the Animal and Plant Health Authority on payment of an as yet unknown fee. This assumes that owners of bows with ivory tips already know about this Act.

I have carried out a very crude straw poll of some 20 amateur string players in a couple of small orchestras I play in. I asked first how many of them had ivory tips to their bows, and secondly how many were aware of this Ivory Act and its impact on musicians. All of them had ivory tips on their bows, and none knew anything about the Act. One or two said that they had no intention of selling their bows, and that the requirement to register the ivory therefore wouldn’t apply to them. I pointed out that if they still owned the bows on their deaths, the executors of their estates would have an interesting problem to solve when they attempted to sell them.

I suspect that this is yet another example of Government legislation which has been insufficiently thought through. There must be many thousands of ivory-tipped bows held by amateur players as well as professionals throughout the country, many of which will not have much monetary value, making any registration fee disproportionate.

With so few people aware of the Act, there could be a large number of criminal cases coming before the courts in due course! I would agree with the chairman of the BVMA quoted in the article: the Government should be doing more to help solve the problem of present-day elephant poaching and smuggling. I cannot see how this Act will help living elephants.

There are a large number of British musicians abroad with great careers (Opinion, May 2019). To measure success based on competition results does not show the full picture. However, I do think there are some issues with the education system in the UK. When I studied at a music college in London, musical ability was often judged according to the social standing of the student within the school. It might sound strange, but in a way this was a very good reflection of a society where the ability to make contacts and secure freelance work is one of the most important personality traits there is.

Furthermore, if you didn’t swipe in once each week you would be sent to someone’s office for a telling-off. This was because schools have to report attendance figures in order to get funding, but it meant their students were discouraged from going on courses as they were not allowed to leave for more than one week. If you were good at the social game you might be let off, otherwise you might have to pay to miss a rehearsal because of a competition, audition or trial – all of which should really be top priority.

There were good things about the education I received, but I believe the problems I have highlighted limit students

a great deal. Combined with high fees, expensive rent and the ensuing need to play gigs constantly, it is difficult for British students to bloom properly unless they move to a country where the system is more student-friendly.