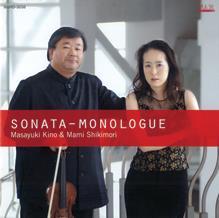 Khachaturian’s popular reputation is based almost entirely on his highly colourful and exuberant concertos and ballet scores. Admittedly, included here are skilful transcriptions of a nocturne and waltz from Masquerade and three pieces from Gayeneh (including the popular Heifetz transcription of the ‘Sabre Dance’), but the real points of interest are the four violin originals. A former pupil of Milstein, Ricci and Gitlis, Masayuki Kino tempers his natural flair with an interpretative wisdom that allows the music sufficient time to breathe. He inflects the delightful Dance in B flat major (whose trademark harmonic orientalisms sound uncannily like laid-back jazz on occasion) and the sinewy Song–Poem with a gentle reflectiveness that turns these innocent early miniatures into something genuinely memorable.

In the two-movement Sonata he also refuses to be rushed, shaping phrases with a disarming, unforced naturalness that is well matched by Mami Shikimori’s sensitive unfurling of the composer’s technically challenging piano writing. Yet the album’s centrepiece (after which it is named) is the solo Sonata–Monologue, composed for Victor Pikaizen in 1975. Some might prefer a more overtly virtuosic, devil-may-care approach to Khachaturian’s occasionally coruscating invention, but Kino’s deeply considered performance possesses a relaxed nobility that is hard to resist. The engineering is tactile, with well-judged ambient space around the instruments.