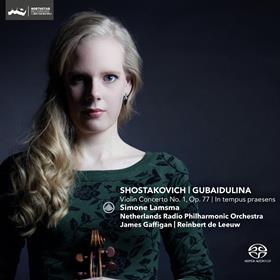 Commissioned by Anne-Sophie Mutter and premiered by her in 2008, In tempus praesens has won for itself a place in the repertoire as secure as Sofia Gubaidulina’s first violin concerto, Offertorium. This is already the third recording of a fervent and gripping work, and Simone Lamsma is a more than worthy successor to Mutter. In contrast to the humility and restraint required by Offertorium, In tempus praesens deploys the full arsenal of a virtuoso technique, but Lamsma is never fazed by its demands. She takes a little more time than her predecessors on record, especially in the soliloquies that break up the concerto’s five sections, and greatly to the advantage of its overall coherence and darkness-to-light narrative.

Applause comes as a cathartic shock after the luminous, hard-won conclusion, whereas the Shostakovich is a studio affair, set at slightly lower voltage. Curiously, I hear Lamsma working rather hard to project, whereas she soars above the heavier orchestration of Gubaidulina. However, within its rhythmically sprung, even Prokofiev-like parameters, the interpretation makes a welcome contrast to some recent accounts of unrelieved pathos. Both concertos are sympathetically accompanied, though Reinbert de Leeuw brings special authority to In tempus praesens, borne of his long and intimate familiarity with Gubaidulina’s music.