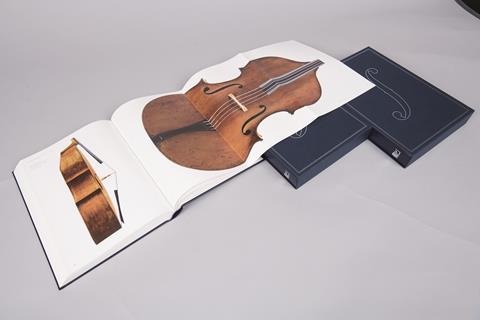 It is not often that I am greeted by an instrument book that provides quite so much surprise and pleasure, and I was delighted as I made my way through this long-awaited tome. Just as double bassists are treated with a certain regard among musicians, for dealers and makers they also exist in a world that is strangely apart from the mainstream of more portable stringed instruments.

The reason comes down to the sheer size of the things, which makes it quite impractical to hold a decent stock in the average-sized violin shop. Hence, double bassists in England are used to travelling deep into the countryside to visit barns full of them, rather than waltzing through the streets of Marylebone or Fitzrovia to the salons of posh shops as violinists do.

That there isn’t much more than a passing knowledge of them is reflected in Charles Beare’s remarks in his preface: ‘Personally, I have only very occasionally been asked to give an opinion on the origin of a double bass, and the first time I was happy to see that it was in appearance exactly like one of the same violins if looked at from the other end of a long room.’

The book’s importance comes in highlighting the peculiarities of English double basses. I cannot honestly imagine I would have been able to identify the bass on pages 298-303 as a Joseph Hill given its lumpen appearance and what I know of his violins, violas and cellos, but seeing it alongside a Lockey Hill and a Peter Wamsley gives me a confidence of how to understand a mid-18th-century trend in making that would otherwise be very difficult to register.

So, overall, I am very grateful for this book. Having spent a few days in its company, dipping in and out of its pages, I feel that I have a greater ability to understand the English double bass on the same terms that I know other instruments by the same makers. It provides for the increase in knowledge that enables musicians to seek competent second opinions and have greater confidence in the market from those who don’t routinely see them, and that is definitely a good thing.

All reviews have their quibbles, but I think it would be churlish to offer much criticism, chiefly because research of this encyclopaedic sort immediately elicits the kind of interest that finds yet more information and perspective. I’m interested enough in the subject to resent the strict alphabetical ordering of the book, which ignores the very distinct schools and periods of double bass making.

I wonder if it was an opportunity missed not to include a section on the great English bows of Dodd, Tubbs, Allen and Hill. In sum, however, this book won’t be gathering dust on the shelves any time soon. It’s an extraordinary achievement and I look forward to seeing further volumes that cover other countries.