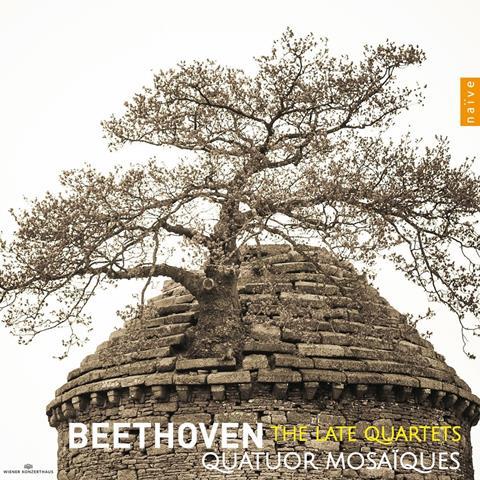 For all their profound sophistication and spiritual intensity, the startling originality of Beethoven’s late quartets inevitably emerges somewhat muted when sonically cushioned by modern steel-wound strings and playing styles derived from the Romantic cantabile tradition. By comparison, the uncluttered focus of the period-instrument Quatuor Mosaïques is evident from the opening bars of op.127, in which the chordal writing sounds closer in timbre to a Jacobean viol consort than a modern quartet, and the melody that subsequently unfolds possesses an ingenuous simplicity free of cloying espressivo. The desire to remove layers of stultifying interpretative accretion is experienced most potently in opp.131 and 132, throughout which furrowed-brow contemplation and agonised soul-searching are replaced by a purity of line and gentle vibrato. These suggest a noble contrapuntal impulse arising naturally out of the past, rather than feeling premonitory of Bartók’s groundbreaking work nearly a century later.

The famous Cavatina of op.130 possesses an open-air clarity of phrasing that places it closer to a Mendelssohnian intermezzo in feel, making the shock of the mighty ‘Grosse Fuge’ feel all the more imposing – the Mosaïques omits Beethoven’s second finale altogether on the basis of it representing a forced artistic compromise in the face of contemporary incredulity. Fascinatingly, in the neo-Classical terrain of op.135, where modern set-ups tend naturally towards interpretative reining-in, the Mosaïques inflects the music with myriad deft touches that reveal this miraculous score as a new way forward – which in the event was left tragically unexplored. It brings to a close one of the most revelatory and thought-provoking sets of these timeless classics in decades.