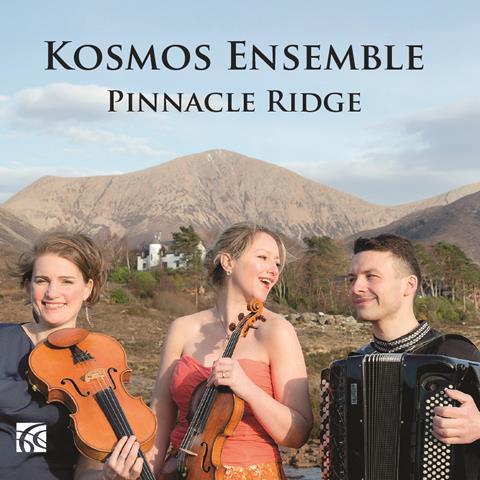 Kosmos is a chamber-folk trio led by violinist Harriet Mackenzie which aims to create bridges between classical music and folk. All pieces on Pinnacle Ridge were arranged by the ensemble to work for violin, viola (Meg-Rosaleen Hamilton) and accordion (Miloš Milivojević), and these instrumental forces prove ideal for the music chosen. The dominant inspiration is Gypsy and Jewish music, and local folk traditions from Eastern Europe and the Balkans (Serbia especially, which is from where the excellent Milivojević hails).

The classical pieces you would expect are all here, though often with a twist: Zigeunerweisen (with parts redistributed among the trio, and a Hungarian folk melody inserted in the middle), Brahms Hungarian Dance no.5 and Monti’s Csárdás. Against this context, the pieces from, or inspired by, elsewhere – the album’s title is from a Scottish reel inspired by a mountain range on the Isle of Skye – stick out stylistically. That’s a compliment to the Gypsy fire of this ensemble. MacKenzie’s playing is charismatic, with a bold tone, and the ensemble playing is lock-step tight.

The sound is rough around the edges in places – with a few slips – but that’s in the nature of both this music and the feeling of a live performance.