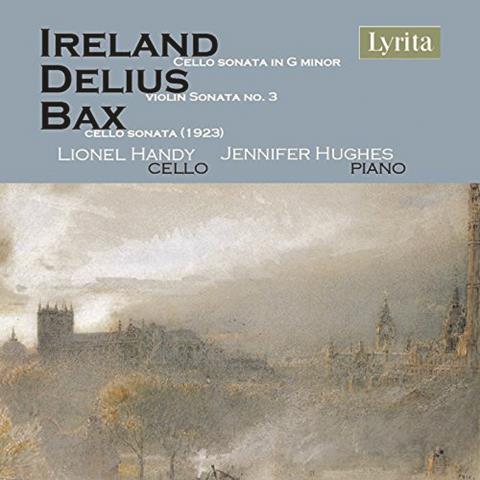 Commissioned by Gaspar Cassadó, Bax’s Cello Sonata is cloaked in grand gesture and accessible tonal lyricism, but was never really taken up by the great cellist and quickly dropped from the repertoire – something Bax described as one of the major disappointments of his life. Lionel Handy has fathomed the secrets of this turbulent and rhapsodic work and he forges a compelling partnership with Jennifer Hughes, whose piano playing is sensitive and strongly defined. The clear recording allows the textures to shimmer through, reminding us of Bax’s strong interest in Debussy.

The year 1923 proved a golden moment in British chamber music as Ireland’s Cello Sonata also hailed from the same year. In the first movement of his Sonata, Ireland makes frequent recourse to oscillating metres and triplets as a developmental device, these performers making much of these features to pre-empt any sense of predictability. A striking rhythmic motif defines the finale, which both performers readily latch on to as a welcome dramatic contrast to the prevailing lyricism of the rest of the work. Lionel Handy’s accomplished transcription of Delius’s late (1930) Third Violin Sonata – full of trademark slipping harmonies and cast in long undulating melodies – is again exquisitely realised by both artists. In fact, the transcription works so well that one might justify renaming it Delius’s Second Cello Sonata.