Book reviews: ‘Mr Blok’ and ‘The Speed of Dark’ 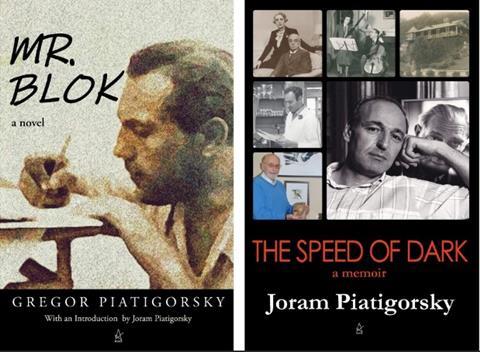 The Speed of Dark: A Memoir

It was recently discovered that Gregor Piatigorsky was born in 1904, one year later than his previously official birthdate. I learnt this from The Speed of Dark, a memoir by his son Joram Piatigorsky, one of two recently published books connected with the most charismatic of the 20th century’s great cellists.

The other is Mr Blok, a serio-comic surreal novel written by Piatigorsky in the late 1940s and early 50s and now finally published with a beautifully written introduction by Joram. It completes the current Piatigorsky prose canon (some short stories, essays and poems still remain unpublished) and is, for sure, an odd book that some will like and others not. This would not have bothered its author, given his declaration in the foreword that ‘readers will find Mr Blok a likeable fellow, who will not mind in the slightest being put aside, should he not succeed in holding your attention’. The titular Mr Blok is a controversial New York artist who vacillates between self-confident artistic vision and alienated despair. The book was originally entitled The Ditch, referring to the muddy channel that he ends up falling into – and indeed in which he finds himself at the opening. In between, the loosely connected narrative follows him through love affairs, encounters with the police, near panic that he might have contracted leprosy, and lecturing on his art for the Teyton Women’s Committee for Promoting Geniuses. It culminates in a chaotic Assembly of the Aristocrats of Mind Society, who honour him as their ‘Idol #49’.

I reacted to the book much as I did to actor David Niven’s 1981 novel, Go Slowly, Come Back Quickly, in that I most liked the parts that seem to be autobiographical, as well as the passages in which the protagonist serves as Piatigorsky’s surrogate, voicing his innermost beliefs and philosophies. Indeed he told Doris Stevenson, the long-time pianist for his masterclasses, that ‘he portrayed his real self in Mr Blok.’ Violinist Paul Rosenthal, who (playing viola) recorded Tchaikovsky’s Souvenir de Florence with Piatigorsky and Jascha Heifetz in 1968, noted to me ‘that in busying himself with the composition of a work of fiction when not performing is already a statement of some sort. His wonderful imagination never stopped being active and his charm is as evident in his book as it was in his conversation.’

I first read Mr Blok in a bootlegged photocopy when I was studying with Piatigorsky many years ago. Revisiting it after reading The Speed of Dark I appreciated it much more. Retired after a 50-year career as a molecular biologist heading his own laboratory at the US National Institutes of Health, Joram Piatigorsky has now embarked on a second career as a writer. As one would expect, he offers an intimate view of Piatigorsky as a person and a personality (and in so doing, illuminates and contextualises Mr Blok) and, being a scientist, he relates and reflects on his own career and research. But most of all he addresses the challenge of finding oneself. Each of us must meet that challenge, but with Piatigorsky as a father and Jacqueline de Rothschild (of the banking dynasty) as his mother, ‘from birth, the extraordinary was ordinary in my family’. Joram is a spectacular writer; his memoir is not only skilfully and elegantly composed, but honest, insightful and poignant. Joram’s achievement encompasses reflections on creativity in both art and science, giving and accepting feedback and criticism, the qualities of leadership, and most of all, the joy and fulfilment of living one’s own life on one’s own terms.