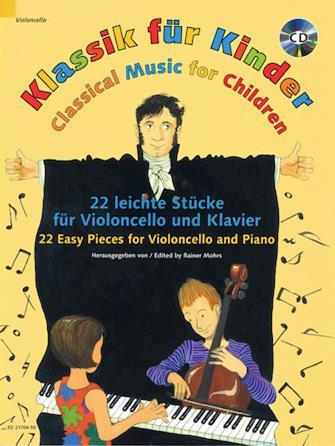 Classical Music for Children: 22 Easy Pieces for Violoncello and Piano

Classical Music for Children: 22 Easy Pieces for Violoncello and Piano

This is a good little compilation, part of a series already popular in Germany. Comparable to the chronologically ordered ABRSM Time Pieces and EMB’s Violoncello Music for Beginners, Schott’s publication has a narrower time range, starting with Corelli and ending with Arnold Trowell (d.1918), with the Baroque and Classical periods more heavily represented than the Romantic.

All the bowing marks are sensible and helpful. There are plenty of dynamics added to the Baroque pieces, too, although strangely they are in brackets only in the Duval movement and the Cirri Sonata in C major (all three of whose movements are included here). It would have been helpful to have a key for the small cross denoting a trill that appears throughout the Duval at the bottom of the page.

Mohrs’ selection is a mixture of well-known popular classics like the slow movement of Haydn’s ‘Surprise’ Symphony, Papageno’s song from The Magic Flute, original (the three Gretchaninoff miniatures are a valuable addition) and charming discoveries that include a very pretty Allegretto grazioso by Stanley and a lively Bourrée by Hasse. I can see some of these pieces being added to exam board syllabuses in the future at the level of Grades 2 and 3.

The book comes with a CD and a piano part designed to be mostly easy enough to be played by other young musicians.