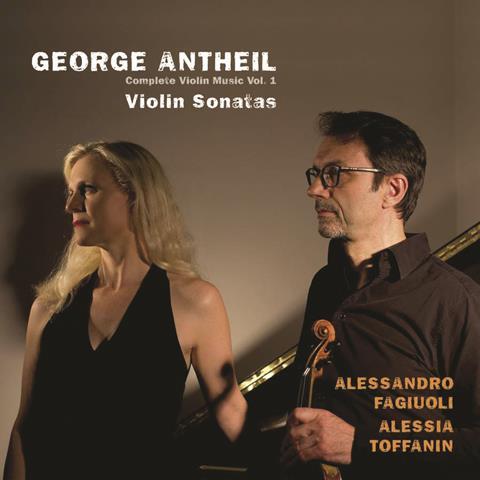 Friend to Joyce and Pound, scourge of critics on both sides of the Atlantic, George Antheil (1900–59) said goodbye to the provocative experimentalism of 1920s Paris to resurface in the US as a composer of sonatas and symphonies determined to leave behind his former reputation as a ‘bad boy of music’. Tropes of neo-Classicism, Cubism and even Dadaism lend the first three sonatas an anarchic spirit of invention that yet survives with a Soviet Russian accent in the motor rhythms of the Fourth.

In all his guises, Antheil is well served by this Italian duo. Recorded quite close to the microphone, Alessia Toffanin is a hard-hitting accompanist both in the Rite of Spring rhythms of the First Sonata and on the drums – a part written for Pound – in the North African coda of the zany and eclectic Second. Better still is the Third, learning from Satie as well as Stravinsky on a curiously mesmerising 18-minute tour around a few offhand motifs.

Beautifully controlled bowing, even tone and a fine sense of the absurd lend distinction to Alessandro Fagiuoli’s playing, but his heavy-handed take on the Fourth – which feeds bits of the First and Third through a sort of Shostakovich-toothed sausage machine – lacks the manic energy and devilish glee of Vera Beths and Reinbert de Leeuw (Auvidis Montaigne). Nevertheless, if you can live with the claustrophobic sound, Fagiuoli and Toffanin make the most persuasive case for the Third in its first recording.