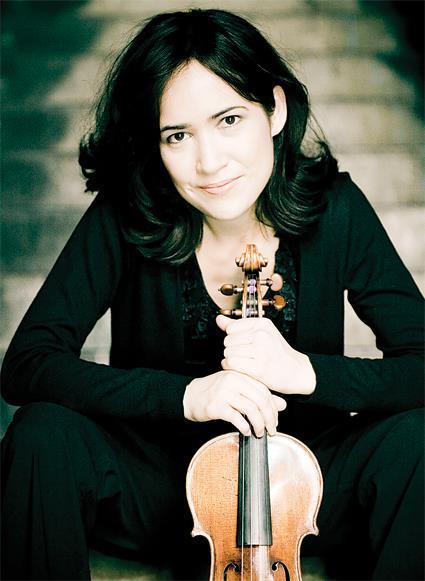 I usually need the pressure of an impending concert to practise with utmost concentration and the greatest efficiency. Practising simply for the joy of playing happens rather rarely in my practice diary, so today is an exception.

While my fingers are waking up, I start with a very slow four-octave scale, with vibrato in increasing speeds. Adding rhythm and speed to the scales, I apply different left-hand accents. To get more familiar with the higher part of the fingerboard, I climb up two octaves on the G strings with 1–2 and 3–4 fingerings, paying extra attention to intonation when descending the fingerboard.

About 15 minutes later and after a few four-octave arpeggios, 3rds, 6ths, octaves and 10ths, I feel ready to go on to Paganini. I start with Caprice no.6, which always makes my left hand feel quite strong: the tremolos train the fourth finger and the double-stops stabilise the entire hand. Then I play through no.8 to get a good workout of 3rds, preferably in one tempo.

To finish off my warm-up routine, I usually play through a movement of Bach. But with today’s relaxed schedule, I take out a book of Reger’s solo violin works and read through a Prelude and Fugue. At first I get quite enthusiastic about his adventurous harmonisation, but about halfway into the fugue, playing all the chords becomes a bit arduous and it reminds me of why I still haven’t taken any Reger on stage yet.

After a break, I reach for the orchestral score of Bruch’s Second Concerto. I am adding this piece to my repertoire this season, my first performance being about two months away. Learning the orchestral accompaniment helps adjust dynamics, for instance in putting a piano passage in dynamic relation to the accompanying instruments. A score can also give clues as to which passages might be tricky to play together with orchestra. Fortunately, this score seems to be relatively simple with rather sparse and clear accompaniment. But in reality, I will only find out about the tricky spots when I finally stand in front of the orchestra.

Next, I turn to Prokofiev’s First Concerto, which I will perform in about two weeks’ time. As with all pieces I have been living with for a while, it has been instructive for me to play through either the entire work or major parts of it at an extremely slow tempo, but keeping the musical context – even exaggerating it, if possible – and paying extra attention to phrasing, articulation and transitions. Most of my musical ideas have come from practising this way, as though I’m putting the music under a microscope.

I do exactly this with the first movement, repeating the fast passages and jumps in the development section a few times. After that, I play through the third movement in regular tempo with my iPad microphone on. Listening back to it, I discover details such as unwanted bow accents and out-of-tune or scratchy-sounding notes. I revisit these spots and then play the movement for the microphone again, this time also experimenting a bit with dynamics. What I hear over the speakers encourages me at times, and is frustrating in other places.

Tonight I have the first of several performances of Beethoven’s ‘Triple’ Concerto within a week. Unlike on a luxury practice day, without rehearsals or a concert, I have to practise against the clock today. As it’s 8.30am and I’m in a hotel room with wooden floors and no carpets (and many hotel guests, including the entire orchestra, probably still asleep), I put on my practice mute and play a short routine of triads, double-stops and four-octave scales at slow and fast tempos. For the remaining 45 minutes, I play slowly through the entire concerto, repeating some of the very exposed passages and jumps in the first movement. Finally, I check the metronome for two semiquaver passages in the third movement where I always find it a challenge for the trio to stay together, ‘against’ the orchestra.

Then my piano partner and I meet our cellist for the first time, as our original cello colleague had to be replaced overnight. As a trio, we only have about 30 minutes to rehearse before our orchestral rehearsal starts. In such a situation, you just hope for extreme luck, in that your colleagues will have a similar musical idea of the piece, and be flexible enough as chamber musicians. This turns out to be a lucky day.

In the afternoon I go over, in my head and on the violin, the things I noticed during our rehearsal. Keeping in mind the rather dry acoustics of the hall and the high humidity – which makes bow reaction a little slower than usual – I focus on adjusting articulation. For the final 20 minutes before going on stage, while waiting in a cold dressing room I literally try to warm up my fingers by repeating a couple of the concerto’s fast passages and jumps slowly and then in the original tempo. And I already look forward to the next morning, when hopefully I won’t have to practise against the clock.

From the May 2013 issue. Download the full edition here