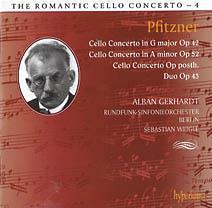 Although the two most memorable things about Hans Pfitzner (1869–1949) have to be his opera Palestrina and his hospital visit by Hitler after a gall bladder operation, this all-but-forgotten German composer also had a penchant for the cello. Alban Gerhardt, always keen to dust down neglected cello works, presents Pfitzner’s three concertos with a purity and poise that can only help to recommend them.

In the earliest, a student work from 1888, he plays the opening solo section with a delicate grace and beauty, enhanced by the disc’s finely honed recorded sound, and virtuoso passages of octaves and high tessitura cross-string work are never overblown. Fifty-five years later, Pfitzner reworked this concerto’s main theme in a second A minor concerto op.52. The passionate Feuerlich third movement contains some beautiful sotto voce playing from

Gerhardt, who joins the lead clarinettist in a humorous and unusual dialogue in the first-movement cadenza.
The G major Concerto of 1935 is a better crafted and more evenly inspired work, whose broad, expressive writing for cello Gerhardt conveys with taste and feeling. In the Duo of two years later, the cello still predominates, though the violin finally gains equal status towards the end, with some expressive playing from Gergana Gergova.