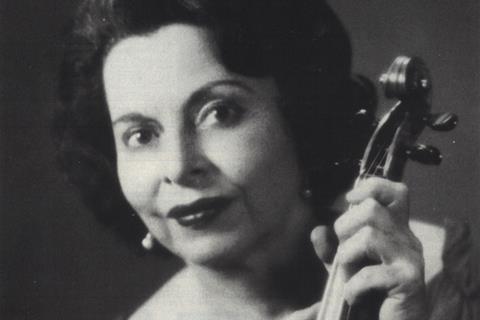 ‘I’m not enough of an egotist to think that I’ve had a major career,’ Fredell Lack told The Strad in 1990. ‘It’s been a funny kind of career. I’ve played regularly, always had a certain number of concerts, but not a major career.’

The daughter of Russian-Jewish immigrants, Lack was born in 1922 in Tulsa, Oklahoma, and soon became the object of her parents’ ambition when she began to show pronounced musical talent. Attending concerts from the age of four, Lack developed a fascination with the violin following a recital by Tosca Berger, a New Zealand born soloist who had been a pupil of Ysaÿe and Willy Hess. Berger ended up settling in Tulsa and gave the young Lack her first technical grounding in the violin. Berger excelled and developed into a child prodigy, giving public performances by the time she was eight.

The family moved to Houston, where Lack continued her studies with Josephine Boudreaux (a pupil of Ševčik and Hubay), the concertmaster of the Houston Symphony Orchestra. Yehudi Menuhin’s emergence had caused a sensation and, especially for a Jewish family with a prodigy on their hands, his teacher Louis Persinger was the number-one choice. He agreed to hear Lack in New York and accepted her as a pupil, in a cohort at the time including Isaac Stern, with whom she remained friends for life. Arrangements were made and by the time she was twelve she had been installed as a boarder in New York while her parents remained in Houston.

Repertoire was key to Persinger’s approach. ‘He had the idea that one should go through all of it when one is young, to put it in the memory,’ Lack told The Strad. ‘I would bring the first movement of a concerto one week, the second movement the next week, the third movement the third week. For the fourth week, I played the entire concerto by memory. Then it was simply put away.’ She made her professional debut at 17 with the St Louis Symphony and the Mendelssohn Concerto, and by the time she was 21, having won a scholarship to the Juilliard to continue studying with Persinger, Lack had a working repertoire of the entire concerto canon, and soaked in more music as a regular concertgoer at the New York Phil and the Met.

She also worked extensively on chamber music with English cellist Felix Salmond, who had by that time settled in New York. On graduating from the Juilliard in 1943, Lack asked Persinger for permission to take lessons from Ivan Galamian who was building a reputation as a teacher. ‘I always felt that I got the best from each one,’ she told The Strad. ‘Persinger, for the personalised sound and use of the left hand, and Galamian for the use of the bow.’ She also noted a series of 1951 masterclasses with Georges Enescu as particularly influential.

In the same year she entered the Queen Elisabeth Competition in Belgium – the first year the Soviet Union had participated since the second world war. She was one of two Americans to reach the final but claimed that the two Soviet judges (one of which was David Oistrakh), zero marked the American violinists. She came ninth and won the Prix de Liege, and the competition changed its rules so that no individual score that deviated more than ten per cent could be given without discussion.

1951 was also the year she effectively stepped back from the potential for a truly stellar career, moving back to Houston following her gastroenterolist husband’s appointment to the medical school there. A year later, a dog bite caused her to lose the tip of the fourth finger of her left hand, and an enforced break from the violin, and technical recalibration, followed – though the incident did not dim a life-long advocacy for animal rights.

In 1955 she founded the Lyric Art Quartet with principals from the Houston Symphony, covering much of the standard repertoire as well as making a point to include contemporary music in every concert.

In 1959 her teaching career began when she decided to take up the offer of a position as violin professor at the University of Houston. That became her base until her retirement just short of 50 years later, in 2008, though she stepped back from full-time teaching in 1988. Probably her most celebrated pupil came to her as a child: Frank Huang, current concertmaster of the New York Philharmonic, and previously of the Houston Symphony.

Her performing career was steady, and she was a regular soloist in the US and in Europe, as well as making a handful of recordings. Her Shostakovich Violin Concerto no.1 was reviewed in the July 1987 issue of The Strad, where the ’authority of her interpretations and splendid quality of her playing’ were praised

Lack played the 1727 ‘Baron Deurbroucq’ Stradivari, which she chose while blindfolded, from a collection of Strads, Amatis and Guarneris laid out for her by New York dealer Emil Herrmann. ‘After only six notes on my violin, I said: “This is it!”,’ she told The Strad in 1990. ‘I absolutely knew that this was the quality of sound I loved. Ever since then, I’ve never wanted anyone else’s fiddle.’

Lack is survived by a daughter, a son, and a number of grandchildren.