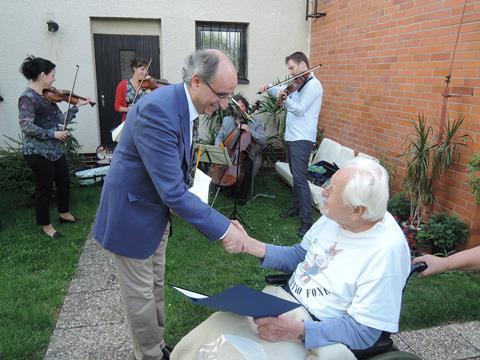 Milan Škampa, violist of the Smetana Quartet from 1956 until the ensemble disbandment in 1989, has been awarded the International Viola Society’s highest award, the Silver Alto Clef, for the year 2016. IVS president – and long-time contributor to The Strad – Carlos María Solare visited Dr Škampa at his home in Prague to bestow the award upon him ’in recognition of his outstanding contributions to the viola’.

Apart from his work as the Smetana Quartet’s violist and as teacher at the Prague Academy of Music, Milan Škampa is a musicologist whose research on the quartets of Janáček has elucidated numerous problems of their genesis and interpretation. Throughout his life he has coached and variously supported younger ensembles such as the Panocha, Kocian or Pavel Haas string quartets. One of these, that has chosen to name itself after their mentor, attended the little ceremony in Dr Škampa’s garden.

Photo: Milan Škampa, right, and Carlos María Solare with the Škampa Quartet in the background