Chan, who has served as concertmaster of the Metropolitan Opera Orchestra for 17 years, will take up his new Montclair post from the ensemble's inaugural 2017-2018 season 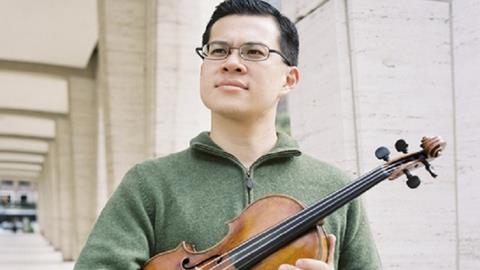 The Montclair Orchestra has named violinist David Chan as its first music director. The ensemble was launched in 2016 to perform 'high level orchestral music' at venues throughout Montclair in New Jersey, US.

Chan, who has served as concertmaster of the Metropolitan Opera Orchestra for 17 years in New York, will take up his new Montclair post from the ensemble's inaugural 2017-2018 season, having seen off competition from nearly 100 international candidates.

A soloist and chamber musician in addition to his orchestral commitments, Chan has been on the faculty of The Juilliard School since 2005 and the Mannes School of Music since 2015. He co-founded the Musique et Vin au Clos Vougeot festival in the Burgundy region of France, where he has also served as a conductor.

'I am deeply honored to have been chosen as the first music director of The Montclair Orchestra,' he said. 'It is always exciting to participate in the birth of a new musical organisation, and our goal is to bring not only the very highest level of music-making to the suburbs, but to offer concert experiences that are meaningfully different than what you find elsewhere, and in so doing appeal to new audiences But above all, as a resident of northern New Jersey myself, I am thrilled to have this opportunity to give back to the community.'