How to fit these brass pegs, gears and tuners, as used by English bass makers in times gone by

Shortly after arriving in London, I started using copies of the old ‘Baker-style’ tuners for my basses. For me, it was inspiring to see how the English craftsmen of the 18th and 19th centuries were masters at working with brass.

Since my pegbox narrows quite a bit towards the scroll, the first three brackets with the worm gear are the same size, whereas the last one, for the A string, has a smaller worm gear. I start the fitting with the G-string tuner, because the G string has the smallest diameter of the four strings and it can run at a steeper angle from the upper saddle into the tuner’s string hole, more easily than the thicker E string.

For the G string it is important not to be too close to the end of the pegbox at the upper saddle, so that the strings can be tuned without touching any of the pegbox. 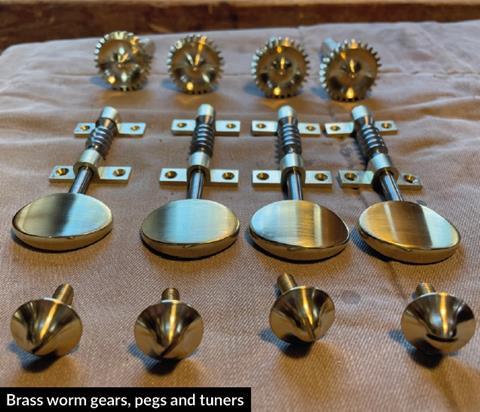 1. I place the worm gear on the pegbox, with the same distance to the upper and lower edges (1a). Then I mark the middle of the peg by holding the tuner upside down. The little pointy ornament of the wheel makes a clear mark to indicate where I should drill the peghole, with the help of a light knock with the hammer (1b)…