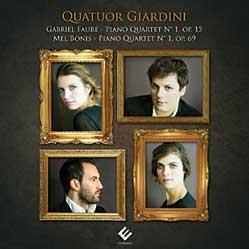 There are many good things on this recording. The playing is fluid and often extremely beautiful, the tone sweet and appealing. First impressions, sadly, are not great. The intonation is less than impeccable, something spotlit immediately in the grand flowing theme in unison and octaves (but not quite unison or octaves, unfortunately), which opens Fauré’s First Piano Quartet. The dotted quaver–semiquaver couplet that pervades the first movement is often blurred, effectively becoming a crotchet. Sometimes notes are swallowed in the phrasing, all but disappearing altogether. However, there is a wonderful lightness to the playing, which takes nothing from the emotional complexity of the music but rather adds to its wonder. The second movement is fleet and enchanting. In the third, phrases from strings and piano dovetail in beautiful, intimate dialogue.

Mélanie Bonis was a classmate of Debussy at the Conservatoire de Paris, from which she resigned to become a wife and mother. She was in her forties when she wrote her op.69 Piano Quartet, around the turn of the 20th century. She was a student of Franck, whose influence seems apparent in the engaging extended melodies and the spicy chromaticism. It is a beautiful work, well worth knowing, and this is a fine performance. The recording is close and warm.