Dvorák: Cello Concerto in B minor op.104, Symphony no.9 in D minor ‘From the New World’ 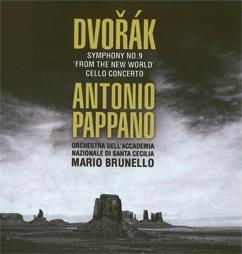 This live recording made during the Santa Cecilia orchestra’s 2011/12 season couples a feisty account of Dvo?ák’s ‘New World’ Symphony with a performance of the Cello Concerto that has a strongly operatic character. Clearly such a concept is shared between Janigro pupil and Tchaikovsky Competition winner Mario Brunello and conductor Antonio Pappano, who view the structure of the concerto as a staged discussion between two contrasting forces. Certainly when the sumptuous tones of Brunello’s Maggini cello join the dialogue there is the notion of a singer walking on stage.

Sometimes this approach works beautifully, as in the Adagio, where there are some exquisitely shaped phrases, even though Brunello tends to ignore the ‘ma non troppo’ part of Dvo?ák’s tempo instructions. The rubato seems less convincing in the opening Allegro, where the exaggerated ritardando into the second subject feels too robust an exclamation mark and the frequent oscillations in tempo tends to make the rest of the movement feel rather episodic. Having said that, this warmly recorded performance offers an intense and passionate view of the work that becomes increasingly persuasive on repeated hearing.