From the archive: who was the first female violinist?

The Strad marked International Women’s Day 2014 with this gem from the archives, in which our writer of 1894 ponders the name of the first violinist ‘of the fair sex’ 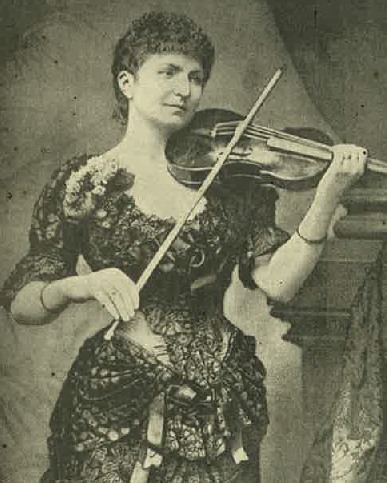 Who was the first female violinist? This is no conundrum; nor do we offer a prize for the first correct answer to the question. All the same, it would be interesting to know the name of the first of the fair sex to break the bonds of convention and venture to play the violin in public. A letter in The Strad for June 1892 says: ‘A lady named Ottey played the violin in concerts as early as 1721, in England.’ This lady, Mrs. Sarah Ottey, was an accomplished musician, since she performed publicly upon the harpsichord and bass viol as well as upon the violin. Then again, we know that a certain Frl. Neumann was a well-known concert violinist in 1838, when she took the Italians by storm.

It is related of Queen Elizabeth that among her amusements was the playing of the lute, which, though not a violin, was its ancestor. Mme. Mara, too, the Queen of Song of her day, was known (under her maiden name of Schmeling) as a violinist before she discovered that she possessed vocal powers of an extraordinary type. Sacchi, Gautherot, Paravicini, Maria and Teresa Milanollo, are all names well-known to students of the history of violin-playing. But it is not until our own time that the art was adopted seriously, earnestly, and successfully by females. No need, I think, to enter into details concerning such mistresses of the art as Lady Hallé (pictured), Frl. Wietrowetz, Miss Shinner, Frl. Scotta, and the rest of the ‘moderns’.

Dubourg in his chatty volume, ‘The Violin’, says: ‘instead of a bow-arm, must ladies be allowed only the arm of a beau? Why should not a lady play on the violin?’ Had Dubourg lived to our day, lived to see the revolt of the daughters about which we hear so much nowadays, had he read the ‘Echoes of the Week’ in our contemporary The Sunday Times, he would have seen there the statement that nearly 2,000 ladies are at the moment studying the violin at the Guildhall School of Music. (I may be allowed to remark there par parenthèse that Sir J. Barnby has publicly corrected this statement, though he says there are probably 1,000!)

In days gone by it was considered unladylike and ungraceful accomplishment (for some incomprehensible reason), to play upon the violin. Dubourg observes: ‘Is there grace in making a fire, or cutting bread and butter, or darning a stocking?’ Truly not, friend George, truly not.

Why in the brief space of a few years has public opinion, with regard to female violinists, undergone so violent a change? It is not because instead of being unladylike and ungraceful, the playing upon the lute and viol is in reality one of the most graceful of technical accomplishments? Can it be denied for one moment that if a lady must play any instrument she cannot choose one more (or even equally) graceful than the violin? Next to the violin, I may take it that the pianoforte is the most popular instrument among ladies. Now, candidly, does this afford one tenth part of the opportunity for the exhibition of grace that the violin affords? Where is the opportunity for showing the beautifully shaped arm, the graceful lissome figure when playing the larger instrument? The very shape of the violin is graceful – can the same be said of the other? No-no-no!

No doubt, ladies, you took it upon you to delight the sterner sex, to witch them by your grace by means of the fiddle because you recognised long before man the magnificent opportunities that presented themselves. All honour to you for your discovery, and for your real pluck in carrying out your conviction in the teeth of a despotic opposition.

In conclusion, ladies and gentlemen, the next time you visit the Queen’s or St. James’s Hall when a violinist and a pianist of the fair sex are taking part in the concert, look with half an eye, and if that is not all-sufficient to prove to you beyond all question that the possibilities of being graceful are as great in the one as they are small in the other, I am very much mistaken. For the one affords an opportunity because the performer stands erect while at the other the performer being seated, invariably looks – to use an expressive if somewhat vulgar phrase – more or less ‘all of a heap’. I do not say that pianist cannot be graceful; all I say is that they rarely are, possibly through no fault of their own; but a rara avis indeed is a really ungraceful lady violinist.

This article was first published in The Strad, August 1894.