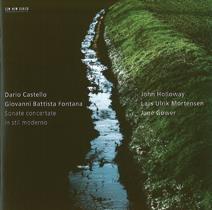 On this exemplary recording, period violinist John Holloway and his colleagues perform seven of Fontana’s 18 Sonate à 1. 2. 3. (1641), framed by six works from Castello’s two books of Sonate concertate in stil moderno (1621, 1629). Holloway aptly describes these sonatas as ‘miniatures but with an almost operatic range of expression’, as their sectional structures admit dramatic contrasts of mood, character and pulse, graduating from simple melodic passages to quasi-improvisatory, extravagantly ornamented or virtuoso ones at the blink of an eye.

These performances demonstrate stylish, technically assured and rhythmic playing, with well-measured tempos bringing out several interior subtleties. There is remarkable precision of ensemble throughout and the sensitively phrased and lucidly balanced textures are infused with a wide range of instrumental colour and dynamic. Holloway and Lars Ulrik Mortensen play two of Castello’s and four of Fontana’s sonatas with poise and aplomb, revelling especially in the dance-inspired passages and the sections of florid ornamentation.

Jane Gower’s dulcian brings further contrasts of timbre and tessitura, strikingly conveyed in the opening canzona-like sections of the four Castello sonatas, as well as the contrasting solo–duo textures of, for example, Fontana’s Ninth Sonata. Together these musicians deliver the full gamut of virtuoso and introspective conceits.