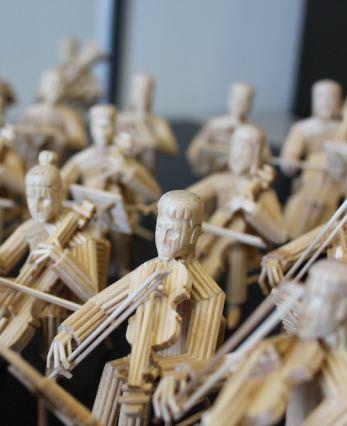 A Canadian artist has unveiled a model of the Ottawa-based National Arts Centre (NAC) Orchestra made entirely out of toothpicks. Go Sato, a scientific illustrator, took three years to craft the 61-piece ensemble, using 12,500 separate pieces of wood in the model.

As well as sculpting each individual musician, Sato made the instruments, bows, music stands, chairs, stools and the conductor’s podium. Sato based the conductor’s likeness on the orchestra’s current music director, Pinchas Zukerman. His wife Amanda Forsyth is also depicted in the principal cellist’s position. The principal double bass figure, who holds his bow with an underhand grip and sits on a backless stool, was created with NAC bassist Joel Quarrington in mind.

‘I believe that my toothpick orchestra is the first in the world,’ said Sato. ‘I want to give it to the NAC because Canada has given me so much in my life, and I love classical music.’ The model will be on display in the NAC foyer until 1 July, after which it will be brought out several times a year, particularly for children’s concerts.

All photos courtesy of the NAC