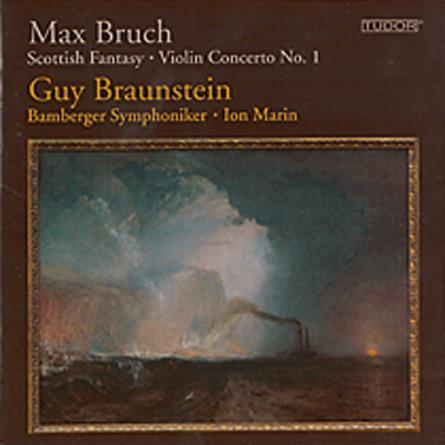 Soon to step down from his role as concertmaster of the Berlin Philharmonic to pursue a solo career, Guy Braunstein, for his part, gives a compelling account of Max Bruch’s Scottish Fantasy. The orchestral opening, however, is more miserable than measured, and if the entry of the first Scottish folk theme brings a smile back to the music, the chosen pulse needed to be a notch faster to inject the required vivacity. There is much to enjoy in the three movements that follow, but we have reached the spirited finale before the performance comes fully to life, and here Braunstein demonstrates a technique that has fireworks to spare.

Much the same feeling crosses into his account of the First Concerto, where the soloist’s first two entries fail to grab the attention, and one wishes conductor Ion Marin had pushed Braunstein with a greater sense of urgency. It is only when the violinist’s sweet and refined tone takes over in the lyric central Adagio, and again in his arrangement of the Romance for Viola, that I warm to his performance.

The Bamberg orchestra seems to be playing more out of duty than pleasure, and maybe the recording team could have given Braunstein a more forward presence, though in a catalogue already oversubscribed with performances of the concerto, this one would not feature among my top choices.