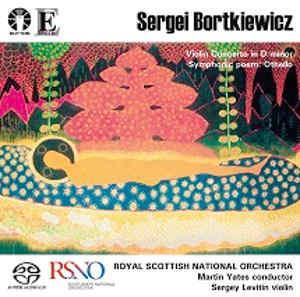 Sergei Bortkiewicz (1877–1952) saw himself as a Russian composer, despite being born in Poland (now part of Ukraine) and, after studying in St Petersburg and Leipzig, spending most of his life in Germany and Austria. His music is unmistakably Russian, of the 19th-century variety with touches of Wagner thrown in for good measure, but no less engaging for that (Glazunov and Glière are obvious contemporary parallels). His Violin Concerto of 1922 is a broad work of some 50 minutes in length that never outstays its welcome.

Sergey Levitin is a commanding soloist in this premiere recording: the precision of his articulation is a marvel and his gutsy tone in the more emotionally charged passages never loses its sense of control. The work itself is lyrical more than virtuosic, so there’s plenty of scope for this side of his playing to shine, yet he also displays nimbleness and rhythmic flair. He’s well balanced in a multichannel recording of satisfying bloom against the soaring accompaniment of the Royal Scottish National Orchestra under the dedicated direction of Martin Yates, and both here and in the thrilling Othello tone poem (where Tchaikovsky’s Romeo meets Wagner’s Tristan meets Strauss’s Till Eulenspiegel) it’s hard to believe this isn’t already stock repertoire for the performers.