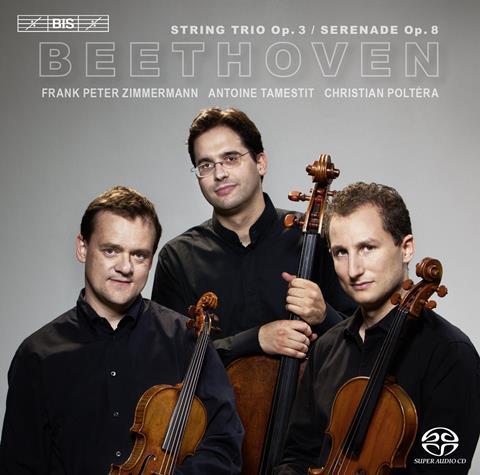 Evincing an old-world allure and sophistication with barely a whiff of ‘historically informed’ rhetoric along the way, the all-star Zimmermann Trio (violinist Frank Peter Zimmermann, violist Antoine Tamestit and cellist Christian Poltéra) recall the classic 1960s period of the Vienna Octet. The previous release in this BIS series of the op.9 Trios deservedly won awards for its intuitive interpretative sparkle, phrasal sensitivity and instrumental mastery, qualities that are fully sustained here.

In the wrong hands, Beethoven’s earliest string chamber works (especially the slow movements) can feel interminable, yet here they emerge as both beguiling and enchanting, articulated by a seemingly limitless range of subtle inflections. Particularly challenging in this respect is the forty-minute, six-movement Trio op.3, expanded from the standard four with an extra minuet and andante intermezzo. If the general interpretative tendency is to adopt an all-purpose Beethovenian trenchancy and rigour, the Zimmermann players float the music free of musical gravity, delighting in the composer’s little asides with captivating charm and precision. This beautifully engineered release (especially captivating in SACD 5.0 surround sound) is quite simply in a class of its own.