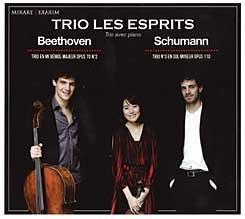 The members of Les Esprits Trio – violinist Mi-Sa Yang, cellist Victor Julien-Laferrière and pianist Adam Laloum – founded just two years ago, are all graduates of the Paris Conservatoire. In the Beethoven E flat major Trio they exchange the aristocratic poise of Szeryng/Fournier/Kempff (Deutsche Grammophon) and youthful thrust of Zukerman/Du Pré/Barenboim (EMI) for a more natural, chamber-scale grace and intimacy. In a performance that is more Mozart in overdrive than tormented genius at the height of his middle-period powers, the Les Esprits players capture the music’s lyrical impulse with unfailing acuity, relishing Beethoven’s bracing sonic resourcefulness in the magical acoustics of Paris’s Salle Gaveau. The finale’s thrusting interjections make a startling impact when the music that surrounds them is conveyed with such joyful exuberance.

If in his E flat major Trio Beethoven recaptures the Classical sparkle and concision of his youth, Schumann’s G minor masterpiece belongs to his late stream-of-consciousness period of the 1850s. Gesturally speaking Schumann’s veneration of Beethoven remains unmistakable, yet as the players make clear, his dream-like realms of structural fantasy attain an elusive expressive freedom that even the master never attained. This captivating performance recreates the tantalising sensation of a composer barely managing to rein in his creative imagination, which is the very essence of late Schumann.